Every now and then a CD comes along that beholds a sense of beauty, a vision of emotion, and a strong longing for greater thoughts to culminate and inspire one to create something within one’s own life and imagination. The first time I listened to Alcest’s “Les Voyages De L’Ame” CD all the way through I felt a need to work on the things that bring me joy and embrace the failures of the past and move past them. Yeah, you might say that’s hard to come by from a genre like Black Metal, where imagery of negative forces and hatred abound, but Alcest is more than heavy music, even so, only two or three out of the eight tracks are in that ‘heavy’ category. The rest of the music has a hauntingly, other world feel through out that leaves you wanting more from this band. At the moment the only band that comes to mind is Agalloch which had that haunting nihilistic feeling on their 2002 “The Mantle” CD, yet, Alcest’s music comes from the polar opposite with lyrics longing for the escape from this cold harsh world and the aspirations and loves of something more. 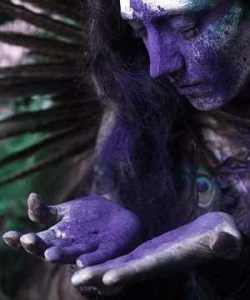 Singer, guitarist, songwriter and creative force behind Alcest, Neige weaves childhood visions of an astral realm he use to travel to with the lyrics and music that describes that time, that feelings, that love, that longing to be embraced again.  “Les Voyages De L’Ame” (translated ‘Journey of the Souls’), in a sense, has a ‘Metal’ feel throughout, but more of an Ambient, Shoegaze feel that leaves you laying back, closing your eyes and traversing the stars within your own subconscious. All music is sung in French and looking up the English lyrics you can sense the beauty behind the poetry written, which I believe you cant embrace well enough from the native tongue.

The music brings about thoughts of a past time, a sense of nostalgia throughout. The title track leaves the listener in a sense of awe, a breathless landscape of something new, something unseen. Music like this can only be brought forward by someone that has traversed those astral realms, embraced it as true reality, and invokes these visions through storytelling and music.

Even though this is categorized as ‘Black Metal’ in a sense, yes it has that element, that feeling on a few tracks yet I doubt true die hard Black Metallers could embrace this without being open minded towards the possibilities of enriching their lives in some sense of the word! For others, don’t let the ‘metal’ parts scare ya away, music is ethereal, celestial, but with a heavy somber kick to it!

Note about video below:
Music video shows a couple through their youth, middle age, and elder self. The video and music has that nostalgic, longing feel. The lyrics below, in English, embrace that knowledge quite well.

“Another Time” lyrics:
A distant prayer, carried by the evening wind
Enlivens leaves in their languid dance.
Hear the song of the old trees, singing for you
For the dark, resting woods.
So many seasons have passed; they did not wait.
The golden leaves dying on the ground
Will be reborn under bright skies
As this weatherworn world remains the same,
And tomorrow, you and I will be gone.